Hey, while I think on - I made the trip to London for the Way of the Rodent 2008/9 Games Awards this past Thursday night. And what a night it was! A bit more low-key than the last couple, perhaps, but no less enjoyable. Alcohol was drunk, swearing was heard, laughs were had, and some games won some awards.

It has to be said that you always get a great crowd at this thing, and this year was certainly no exception. And even if you only bump into each other this one time every year, everyone still feels like a friend, partly because of the brilliant forum but also because everyone just takes everyone as they are and gets along really well. Pop along to next year's... it'll be worth the effort. And check out the mag at the link above for the Awards results... we'll put them up there, sometime...

Oh, and you wouldn't see this at the Video Games BAFTAs... 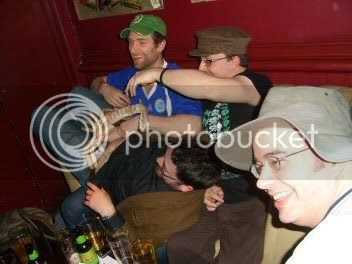 Posted by PaulEMoz at 22:32 No comments:

I was quite excited about playing this. I played the first game way back when it was first released, and really enjoyed it. The second one wasn't much cop, though. And although I read good things about the third, I never actually got around to playing it. Being a bit of a cheapskate (credit crunch? Nah... I've been tight when it comes to buying games since long before that kicked in) I probably wouldn't have bought this one, if it wasn't for Currys being desperate to flog anything that's been sitting there longer than six months.

First things first: it looks stunning. Granted, I'm not a videophile (nor am I an audiophile - years of listening to fast guitars at high volume saw to that), and it's the first game I've really played in HD, but even so... well, I'm impressed.

As far as the game goes, it's pretty much what I expected, and that's not a bad thing. It's yer typical Capcom slash-'em-up fare: over-the-top characters, hordes of barely-threatening minions to dispatch, and some really impressive boss characters that will smash you all over the shop until you work out what you're supposed to do with them. And of course, there are glowing orbs... red ones, green ones, blue ones... flying out of everything you kill or destroy, with the purpose of being put towards the purchase of new skills or items. It's just as well these games are set in a fantasy world... if I tried to buy a pair of trainers or a new pen with glowing orbs, I expect I'd be sent packing with nowt but a couple of choice words ringing in my ears.

There are a couple of difficulty levels (to start with - I expect at least one more can be unlocked), and I've started on the easiest. Don't rag on me... I know how difficult these games can be, and lack of gaming time in the last year has dulled my reflexes. I'll ramp it up later on, perhaps... the difficulty can be changed at any time.

Devil May Cry 4 is proving to be very enjoyable, and I'm looking forward to seeing how the story pans out. It's probably a bit cheesy - most of this stuff is - but it's all done with such incredible style that you can forgive it that.
Posted by PaulEMoz at 20:50 2 comments:

In the last year or so, I've seen loads of "A Movie A Day" blogs and columns spring up. They're very popular... this stands to reason, as movies are very popular.

Videogames are very popular, too. Christ, everyone plays games these days! And yet, you don't see a lot of "A Game A Day" columns.

I guess that's not too much of a surprise... games take more effort than films, by and large. Yeah, films require you to absorb what's on the screen, and then if you're going to write about what you've watched, a fair bit of analysis too. But you can just sit there and let it happen. With a game, you've got to actually do what happens. And in a lot of cases, doing whatever it is that needs to be done can take a lot of time.

I'm going to try and play a different game each day (where possible it will be a game I've never played before), and write a bit about it. Chances are, in many cases, I won't even scratch the surface, and whatever I write might be a bit pointless. This is especially likely given that I'll probably only play for an hour or so. But hey, better than nowt, and if I particularly like the game or get sufficiently hooked, I'll play it for as long as I want. I might even re-visit it here further down the line.

So here we go, then. Let's see how long this lasts. I bet I miss my first day in less than a week.
Posted by PaulEMoz at 20:31 No comments: