Oh, how I remember Spindizzy on the Commodore 64. Massive Gold Medal in ZZAP! 64, plaudits left, right and centre, lovely isometric 3D graphics, teeth-gnashingly hard gameplay. It probably didn't help that comparisons were drawn between it and Marble Madness when, as ZZAP! quite rightly pointed out, they don't play anywhere near the same. 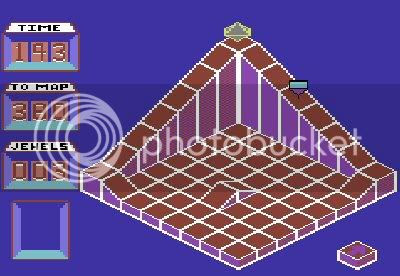 The way it used to be. Difficult, but excellent.

I did buy the original, and I played it quite a bit, probably more down to the fact it cost £9.95 than through my great love of the game. I wasn't very good at it. I imagine a lot of people weren't very good at it. It was a huge game, with hundreds of screens which you "flicked" through, one at a time. I think I managed to complete about a quarter of it, which was probably actually quite good, now that I think about it.

Spindizzy Worlds is not a game that would have been high on my list of must-buys, back in the day. It actually got a release on the SNES as well, research shows. That makes sense... the ST version actually looks a bit like a SNES game. And it seems more like a console game in structure. Whereas Spindizzy just saw you exploring one huge landscape, Spindizzy Worlds, as the title suggests, is split into levels. Well, worlds, actually. Of course. 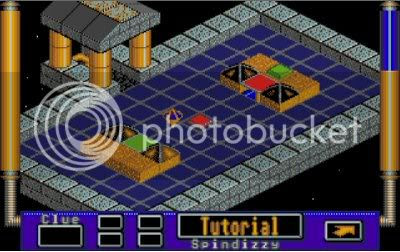 Coloured switches, lifts and jewels. What more could a gyroscope want?

This affords the game the opportunity to be a bit more varied than the original, and it takes that opportunity by having distinct-looking worlds. Some are lush with greenery, some are drab and concrete, some are blue and watery... you get the idea.

It also means that Spindizzy Worlds plays a little differently. Oh, sure... the game still involves piloting a gyroscopic craft around troublesome scenery, picking up energy crystals in an attempt to prolong the game. But it's generally a much more puzzly affair than the original. Or should I say, the puzzles are a bit more structured, with each world having specific goals that need to be completed before progressing to the next. 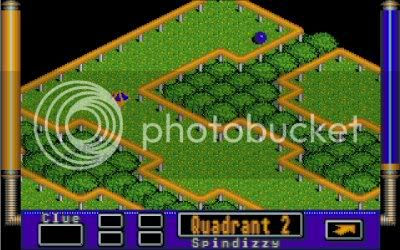 And they're under starters orders in the Spindizzy National...

Occasionally, the game will edge towards its Marble Madness leanings, and throw in some timed levels. These are short, and not particularly difficult. But they add a little bit of welcome variety to the switch-pressing that dominates the majority of the game.

So, Spindizzy Worlds is a more accessible, more structured game than the original. But is it better? Well, despite the fact you can save the game, I don't think it is. It does have irritations... the biggest of which is the "scrolling" method. The original game was a flick-screen affair. This game is flick-screen too, but it also scrolls at times, which is a bit weird. Why didn't they just make it scroll all the time? The method used here just serves to disorientate you a bit.

Spindizzy Worlds is a fine game, but somehow it didn't quite grab me as I'd hoped. That doesn't mean I won't play it again... I'm wondering just how big the game is for one thing. But I don't really think that it's the classic it could have been.
Posted by PaulEMoz at 14:05 2 comments:

I feel as though I've been neglecting my followers of late... all thirteen of you. I know I do have a few more readers than that, so hopefully I'm on the way back to giving you something to read!

On the plus side, my house renovations have been going well, and things are starting to get back to something approaching normal. And I've got loads to play for the blog. I'm thinking about having a few themed weeks... what do you think? I kind of like the variety the way it is now...

Things that I have in mind for the immediate future include those ST games, some iPod Touch games, stuff that I've bought through Steam, and a Split/Second vs. Blur comparison.

So, stick around... once I get cracking again it should be a lot of fun!
Posted by PaulEMoz at 19:24 1 comment:

Anyone remember Silica Shop? It was awesome, especially when you were a kid. They were a mail order outlet based in the faraway town of Sidcup (I'm sure they had an actual, real shop there), and they sold Atari cartridges miles cheaper than you'd find them in the shops. I can't even remember where I got their catalogues from, but it was always with some excitement that I pored their pink pages.

Does this ring any bells for you? If not, you probably paid too much for Atari games...

I know I bought a few games from there, for the princely sum of £5.95. That was an amazing price, given that I bought Activision's Grand Prix for £38 from a shop in town. StarMaster was one of my Silica purchases... I loved that game! I spent untold hours with that one. Another game that I played to death, again courtesy of Silica Shop, was Plaque Attack.

If you asked what prompted me to buy Plaque Attack, I wouldn't be able to tell you. I honestly have no idea. I even remember that I hated its bright pink box. And yet, it found itself nestling in my box of cartridges. 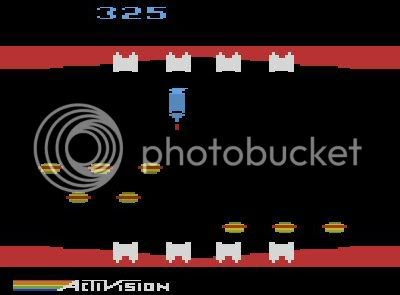 Maybe it was the weird premise that attracted me. You have to defend a mouthful of teeth from the scourge of dentistry... junk foods and sugary foods. You do this by blasting attackers with your tube of toothpaste. If it sounds a bit mental, you'd be right. But it's joyously so, as were so many games from the late Seventies and early Eighties. When it came to game concepts, it was pretty much anything goes.

Plaque Attack is, I guess, the unofficial sequel to Megamania. Steve Cartwright was responsible for both games, but whereas the earlier Megamania was a straight forward shoot 'em up, Plaque Attack plays with the concept, refines it and adds extra elements to make it a much, much better game. 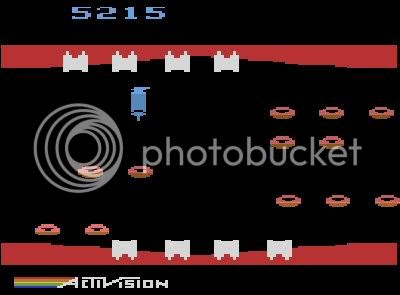 Imagine, if you will, the arcade classic Missile Command. Plaque Attack takes the city defending aspect of that game and applies it to the teeth. Of course, the average mouth has teeth at the top and bottom, so you've got to defend above and below. Although early enemies move slowly and don't present much of a problem, they soon speed up and start to move differently, making it much more difficult and meaning you've really got to be on your game.

Those crazy "enemies" do raise a smile... you start off fighting burgers, hot dogs and chips, and move on to fruits, donuts, candy canes and ice creams. And this is where you discover the other game mechanic that makes this more interesting. If you've ever brushed your teeth (and I hope to hell you have!), you'll know that a common problem with toothpaste is that it runs out. And that happens in this game. You have a limited supply of toothpaste for each level, so you have to pick your shots somewhat carefully... if you run out of toothpaste, any remaining teeth are completely at the mercy of those evil foodstuffs. 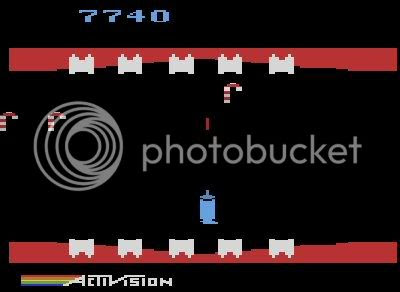 The limited-shot aspect, combined with the tooth-defending, make for a surprisingly fraught and quite tense shooter. Luckily the game doesn't stay entirely true-to-life... every time you score a certain number of points, you'll earn an extra tooth. Early on this means you've got a huge gobful, but as you get into the game you'll be thankful to end a level with an extra tooth, just to top up your seriously decayed reserves.

Plaque Attack actually holds up pretty well, even today. It can be a bit frustrating... those crazy attack patterns don't always lend themselves to a fun gaming experience. But you can't help but enjoy the concept and there's plenty of blasting action to be had. With Microsoft's Game Room still up and running and with Activision's Atari games having a strong presence there, Plaque Attack must be a prime candidate for release there soon. Keep your eyes peeled for it... mine will be.
Posted by PaulEMoz at 15:02 No comments: