The Human Race is a game that I bought on a whim one day, played to death and loved... only to find that hardly anybody else seems to have heard of it!

Based upon the evolution of man, it's a five-screen game that mixes up a few game styles as you aim to progress from dopey caveman to stylin' sophisticate. There are many obstacles in the way, from dinosaurs early on (yeah, OK), to massive lava-spewing volcanos, crocodiles, giant spiders and finally Fate himself. 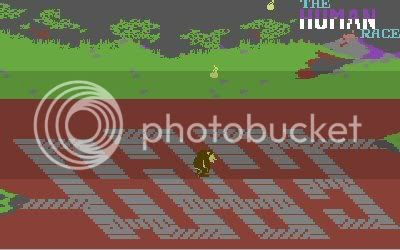 Level two, and it's getting a bit hot underfoot...

Each screen was quite difficult in its own right, but once you'd worked it out it was likely that you'd complete it nine times out of ten (although the final level, the race against Fate, was a bit trickier). Graphically it was a bit of a mixed bag, although still quite nice for a budget game. The music, though, was amazing. There was a different Rob Hubbard tune for every screen, and each one was absolutely superb and well-suited to the level. 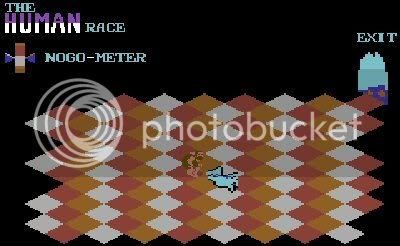 If I saw a spider that big, I wouldn't make it until tomorrow, never mind another 25,000 years.

With no ZZAP! 64 review of this game, I'm not sure what prompted me to buy it, but I never regretted it. I completed it loads of times, and kept enjoying it, although a large part of playing it again and again was to listen to the music. Funnily enough, though, any time I've asked anyone else to play it, they've found it incredibly difficult and hated it. Even the person that cracked it for use with an emulator built in a scrolling message saying the game is rubbish and far too hard! 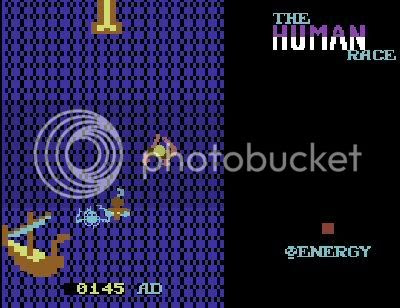 Level five, the race against Fate. I really don't see what's so tricky.

I'm not having that, and I'm going to share the love a bit today. For me, The Human Race kept me entertained for the entire life of my C64 and beyond. I know it's not the best game ever, I wouldn't claim that, but I've always enjoyed it and for me it was a fantastic use of £1.99, It's a game that I still fire up now and again, even today. And I still manage to complete it.
Posted by PaulEMoz at 13:53