Deaths in the family.

This is a trying time for me as a gamer. My time has been very limited of late, but even worse, equipment is packing up on me. First of all, my "upstairs" telly, where I play all of my old systems, has died. That's incredibly limiting in terms of writing this blog... I can't really bring everything downstairs for gaming, as the "proper" telly is usually being used for something.

And then, yesterday, without warning, my XBox 360 proudly displayed the "E74 error" message. I'm gutted, although I suppose it was only a matter of time before I got my first 360 death.

I'll be looking into getting that replaced next week. The telly may be more of a problem. I have, fortunately, still got plenty of games I can still play... I've got a good few Wii games there, and there's the PC games I was sent recently, plus the iPod has a stream of games coming out all the time.

Funny how sometimes you just can't resist something.

I was browsing the Apple Store and happened across this in the "What's Hot" section, for just 59p. The words "Track & Field" were almost enough to get me to buy it regardless, and the positive reviews tipped the balance that little bit further. I was sold.

And I'm happy that I was! Playman Track & Field is very nice indeed!

The game has five events... not too bad given that the original (and Hyper Sports, the follow up) only had six. They're all standard for this type of game... 100 metres, Long Jump, 110 metres hurdles, Pole Vault and Javelin. You can play each event separately, or run them all together in a kind of half-decathlon, where you score points for how well you do in each event.

There are two difficulty levels, Amateur and Professional. You shouldn't have too much difficulty winning every event in Amateur... Professional is where the challenge lies. It's very difficult to get good enough to beat your computerised opponents at some of the events.

So how do you play? It's not exactly like the original Track & Field... belting the crap out of an iPhone screen would not be a good idea. Instead, coloured buttons appear on the screen randomly, and you have to hit them correctly and as quickly as you can to build up speed. Then, at the end of the event, you hold two buttons for differing effects (to "dip" across the line in the running events, for jumping or throwing in the others).

It all works really well, it's challenging, fun and addictive to play, and it has a very cute and endearing style. I would say if you have any kind of liking for Track & Field and fancy an on-the-go version, you could do a lot, lot worse than to spend 59p on this. 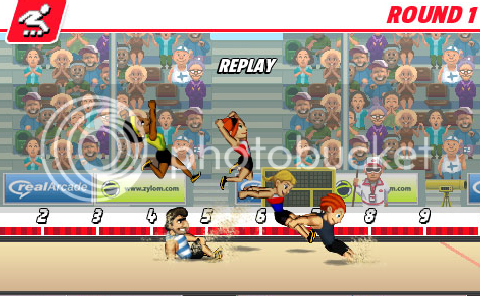 Posted by PaulEMoz at 16:41 No comments:

I've never been much of a fighting game fan.

Wait... let's rephrase that. I've never been much of a fan of fighting games based on martial arts. I've always got on well with boxing games... right from Fight Night and Barry McGuigan's Boxing on the Commodore 64, through the Punch-Out!! games and up to the latest-gen Fight Night games, I'm a keen fan of digital pugilism. But unless it's International Karate or Yie Ar Kung-Fu, one-on-one martial arts games have done little for me.

And that includes the Street Fighter series.

Now, I'm aware that this may by seen as sacrilege. Alright, the first one was a bit cack. But from then on, most of them are renowned as fighting classics. And I can appreciate that. They look great, they're well balanced and they play well. I've just never been able to get the hang of learning all the combinations needed for moves. If it's not "fire button + up = flying kick", I'm pretty much knackered.

Still, I went ahead and bought Street Fighter IV, because it looked good and a lot of my mates were getting it. And I played it for a bit, and I learned about three moves, and I got killed a lot. And I hated it. And I put it away for about a month.

And then, the lads on the Way of the Rodent forum started talking about having an online tournament. And I figured, seeing as I had the game, I may as well take part. If nothing else, at least I'd get a bit more play for my thirty quid.

And so I picked a character that I thought I might have a chance with... Crimson Viper. I figured that with her being a new character to the series, most people would not be as familiar with her moves and I might have a small advantage to counteract my uselessness.

I started practicing. And I didn't do very well. But then somebody suggested I change the difficulty level so that I could at least get through the game and unlock some of the other characters. And it was at this point that I actually started to enjoy the game!

I started getting the hang of some of the moves... and in fact got to the point where I could pull off a lot of them almost every time, even with the 360 control pad. I won some matches. I even got to Seth, the "Boss" character... and lost. But next time, I managed a win!

Suitably buoyed, I played with some of the other characters, and managed to win with them, too. And I learned a few moremoves into the bargain. I think I even managed to become quite reasonable with Crimson Viper. I'll never be able to hang with the big boys... Street Fighter has its own language which I don't understand, but I could now play the game with something approaching a degree of efficiency, and gain quite a bit of enjoyment from it.

What's that, you say? The tournament? How did it go?

Oh. Well, I lost my first match, although it was fairly close... and then I watched Newcastle United lose to Spurs whilst waiting for invites. The lads knew I was probably watching the match, and the invites never came. What a wasted afternoon that was. 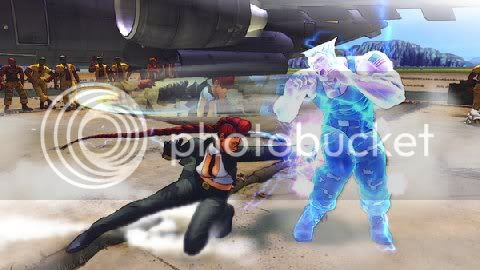 You know, I didn't actually buy this for me. "Yeah, right", I hear you saying... "Pull the other one, Moz. You didn't buy the game with the hot female protagonist and the free downloadable secretary and schoolgirl costumes for yourself. Suuuuure!".

It's the truth, though. See, my wife, Lorraine, used to play the Bloodrayne games a good while ago. And I've always tried to look out for games that might appeal to her along those lines. Now, I know the vampire thing was part of the appeal (bloody women and their bloody vampires... what the hell's so romantic about skinny, pasty bloodsuckers, anyway?), and Bullet Witch hasn't got that going for it. But it bears a lot of resemblance to Bloodrayne in many ways, and I quite fancied "testing" it before letting her have a go on it. She doesn't like to be frustrated when playing a game.

Jesus. This game single-handedly awards a win to anybody that's ever argued that shooters are better on the PC simnply because of the mouse/keyboard control method. Some console games have made a decent stab at getting the controls right with sticks... but Bullet Witch just looks at you, sticks up its middle finger and runs off, laughing.

It's a real shame, because it looks great. The first section I played absolutely nailed the look of middle-class suburban America, to the point where I almost felt like I was wandering around my old 'hood. And when your scantily clad, fit-looking witch character is strutting around, taking up most of the screen in her high heels and black leather and lace, well, it has an appeal.

But then the bad guys appear. And you try and shoot them. And then... then it all goes horribly wrong.

First of all, Witchy takes an age to actually whip out her enormous broom-gun weapon. But once it is actually pointing forwards, fine-tuning it to actually aim at something is like some kind of Krypton Factor test. Left a bit, left a bit... nudge it gently... oh BOLLOCKS! OK, back a bit, right a bit... almost there... FUUUUUCK!!

It'll take you maybe three minutes to get lined up on your first bad guy. Luckily, the chances are he'll just stand there, shooting at one of the passers-by or getting bored waiting for you. So when the reticule finally does turn red, at least the game has given you a sporting chance of killing the enemy before he decides you're worth bothering with.

But that just isn't any fun at all.

I would say that Bullet Witch isn't worth even the tenner that I paid for it, simply because it's almost unplayable. I don't care that it looks good, that the premise is OK, or that I can run around in the game as a gun-toting, spellcasting lingerie model. When I can't actually shoot things in a shooting game, it kind of renders the whole thing a bit pointless. 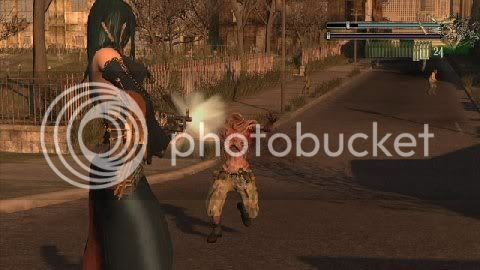 So having just bleated on about storage problems, what have I just done but accepted a shipment of old PC games from one of the lads?

I couldn't help it... he was offering them for nothing (thanks, Mick!), and I thought that the more games I had available for this blog, the better. And I still believe that. But where the hell am I going to put the things?

Ah well, that's to think about later. For now, I've got a range of reasonably recent games, actually. And because my PC at the time most of these came out was... a bit limited, I haven't played most of them. There are quite a few Call of Duty/Medal of Honour-type games there; actually, a lot of first-person shooters in general, with Painkiller, F.E.A.R., Quake 4 and others. There's Morrowind and Oblivion... games which will take me way, waaaay longer than my AGAD remit to play properly, but which I've always fancied. A few racing games, a couple of the Thief games, some RTS games... it's a mixed bag of goodies, alright!

Wonder what I'll go with first...?

Pics to follow (camera battery is totally dead!).
Posted by PaulEMoz at 19:33 No comments: