So much for that idea!

Well, I didn't manage to play a week's worth of Atari ST games, after all. My house is being renovated, and they moved the schedule forward. So I'm living in something resembling a bomb site at the moment, and gaming time is at an extreme premium, with just little snippets being able to be had at occasional moments.

I've managed to keep my Game Room updated on Wednesdays (yes, I still love it, even if there are only three companies signed up... such a massive disappointment), and I've grabbed a good few iPod Touch games (EA had a 59p sale which was nice), but that's about it, and will be for quite a while, I expect.

Can't wait to get back into Red Dead Redemption...
Posted by PaulEMoz at 11:50 No comments:

My posting has been curtailed a little lately, but that's likely to be even more the case over the coming month, with the World Cup in full swing. I love the World Cup... well, I love most footy, but the World Cup is an awesome event, even if it's almost certainly destined to provide disappointment for me as an England fan. But I'll be watching as much of it as possible, regardless.

So, how to play and write about games in the midst of this? Well, I've only just managed to retrieve my Atari ST emulator and games from my old PC. This is very handy, as I can sit at the laptop, playing and writing, and keeping tabs on any matches I might want to watch.

I'll be using STeem, the emulator, and trying to find a few ST-only (supposed) classics, or maybe playing some of the games I have that don't work on the Amiga. I think I'll do this for a solid week, and then vary things a bit. So, a week's worth of ST games are on the menu! Hope you and I enjoy!
Posted by PaulEMoz at 12:44 2 comments:

That's all I was going to write about this after five minutes. Why? It's because, before you even get to play the game, you have to throw an uncontrollable slidey car around Brands Hatch, and the game evaluates your performance and recommends game settings. After my first lap, the setting recommended for me was "you're shit". It just felt horrible to drive, and I was worried that I'd made a mistake in picking this up...

The Need for Speed series has had something of a chequered history... something I might go into in greater depth at some point for this blog. If the Need for Speed ride has been something of a rollercoaster, lately it's been on one of the slow, dull points where you're waiting for the fun. I appreciated where they were going with ProStreet, but there was just too much wrong in there to make it really worthwhile. SHIFT was touted as a reboot, so I was excited to play it... until those first five minutes... 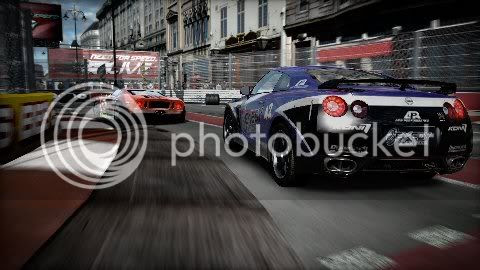 Still, after a little tweaking of the settings, I figured I'd at least try a few races. I had a different car, so I hoped it wouldn't be remotely as twitchy and I could actually get around the track like something approaching a racing driver.

Whaddya know? It was miles better. Not just that, but it was actually enjoyable.

Need for Speed: SHIFT is a much more focused racer. In fact, it's steered away from the cop chases and boy racers, and into competition with the likes of Forza 3. That could be some dangerous territory... even moreso, if they'd managed to get it horribly wrong... 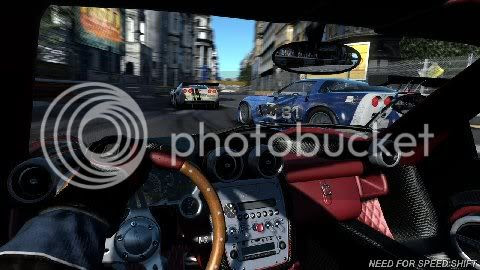 Those driving gloves I got from auntie at Christmas have come in handy...

Luckily, from my first couple of hours with it, they didn't get it wrong. Once you've "driven" your test lap and you can actually get into a car that works as you'd expect it to, it all feels a lot better.

It has to be said, in rebooting Need for Speed, the programmers have taken a fair bit from other games. Besides the now tried-and-trusted arrows on the track for the racing line and braking areas, you earn stars for good finishes, which unlock other cars and races, and you also level up, something which is a big part of Forza 3. Interestingly for a racing game, all the Achievements are earned in the single player game. 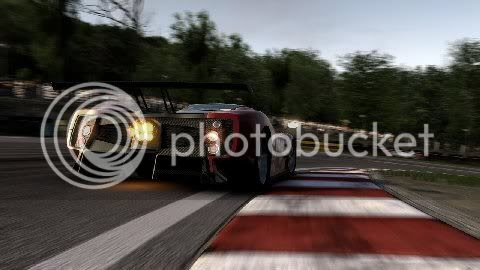 That reminds me, I haven't played Afterburner for a while...

The main innovation here comes with the effects used when you have a heavy bump. You get a sensation of being briefly concussed, which is pretty jarring and does affect your driving and make you think twice about driving straight into an opponent just to help yourself around a corner.

Aside from that, it's standard but high-quality racing all the way. You earn money for doing well, with which you can buy new cars or upgrades... but ~I feel that it's handled in a better way than earlier NFS games. SHIFT is certainly a massive step in the right direction for the series, being a serious racing game whilst still retaining just enough of an arcadey feel to make it easy to get into. I do miss the cop chases, though...
Posted by PaulEMoz at 18:02 No comments:

Hmmm. This one might be a bit shorter than usual, too.

I had no idea what I felt like playing today, so I just delved my hand into my lucky cardboard box o' disks, and out came Shufflepuck Cafe. I remembered it right from the off... it's hard to forget a name like that. Not that I'd ever played it... I read reviews, and it never really appealed to me. I don't think it was released on the Commodore 64, anyway.

That's a motley bunch. What the hell are they doing playing air hockey in a cafe?

Having played it on the Amiga, it turns out I have actually played it before, just not in this guise. Shufflepuck Cafe is Pong. Or Air Hockey. Or 3D Air Hockey Pong. You get the idea, though... you've got a table, with a goal at either end, and a bat-thing to hit a puck with. Get the puck past your opponent's puck, and you score a point. First to fifteen wins.

And that, as you might expect, is all there is to the game. It being set in the Shufflepuck Cafe, you have a number of different opponents that you can choose to play against... and they're intergalactic opponents, so they look a bit, umm, different. And some opponents are better at the game than others... the Elvira-esque woman, for instance, has some kind of psychic powers, so she can throw the puck wherever she likes. No fair.

If you like playing Pong or Air Hockey, then you'll probably get a bit of enjoyment from Shufflepuck Cafe. To be fair, I played it for longer than I expected, but that was more out of a will to try and actually win a game. I didn't manage it, but I was using the mouse on my thigh rather than a mousemat. Not ideal, that, and it might have impaired my ability to judge the game fairly, but I doubt it. It is what it is, it's not bad at what it does, but I can't see me rushing to load it up again.
Posted by PaulEMoz at 22:15 1 comment:

Just a quick little post to tell you about something I picked up on a whim today. It's called Doppelganger, and it costs a mammoth 80 points on XBox Live Arcade's Indie Games.

Oh, alright... that would be a bit too quick. I'll go into a bit more detail. 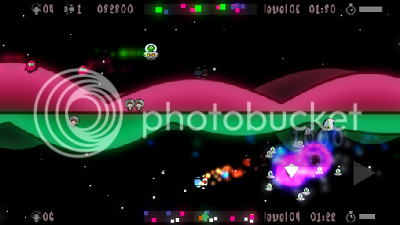 Awww. Little cute alien versions of Defender's nasty ships. They're all still trying to kill you, though.

Doppelganger is basically a cross between Defender and Iridis Alpha. Everyone knows Defender. Most people that read this will know Iridis Alpha... for anyone that doesn't, it's a classic shoot 'em up from Jeff Minter, which splits the insanely fast shooting gameplay across two levels on a split screen.

What Doppelganger does is to remake Defender with really cute graphics, and then apply Iridis Alpha's split screen mechanic to it. So if you didn't think that Defender was hard enough as it is, try playing two games of it at the same time. 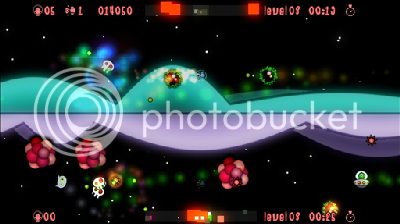 It's not actually as bad, or should I say as hard as it sounds. The levels are kept fairly spacious, with not too many enemies flying around. At least, that's how it is for as far as I've managed to get in the game... doesn't mean it'll stay like that. And that also means in my few quick goes that I wasn't very good at it. Still, for 80 points I would say that Doppelganger is going to give me way more than my money's worth. It's a lot of fun and promises to be a real challenge for any old-school arcade shooter fan.
Posted by PaulEMoz at 21:25 No comments: