I'm off work next week, so I'm definitely going to do a fair bit of blog writing. Definitely. Honest. Really.

No, I am. There'll only be me and the eleven-month-old for a lot of the time... and kids of that age still nap a fair bit. That'll be my chance. Let's see if I can maybe sneak in one a day... just like the old days.
Posted by PaulEMoz at 20:44 2 comments:

Need for - a working disc!

I'm obviously fated not to play Need for Speed Most Wanted on the 360. I bought it for myself for Father's Day, only for it to turn up (via eBay) with a laser burn on the disc. I bought it again for myself last week, for my birthday, when it worked fine... until yesterday, when the disc developed a crack on the inside which has rendered the disc unreadable by my 360. There's no way I'll get a refund on that. Damn.

Maybe it'll be third time lucky? Anyone got a copy in excellent nick that they don't want any more? It's for this blog...
Posted by PaulEMoz at 18:11 No comments:

I'm nursing a sick baby today, so I had to play a game where I only needed to use the mouse and didn't really have to do anything. A bit limiting, that, but then I remembered Alter Ego...

I remember reading the review of this in ZZAP! 64, absolutely ages ago. It got a Gold Medal and a 98% score, so it had to be amazing, but it was disk-only and I didn't have a disk drive (although I did get one late in the life of the Commodore 64, but never saw this game anywhere). It was with some degree of interest, then, that I discovered a browser version of this a few years ago.

Although I thought it was a really interesting game, I never managed to play it through to the end, and ended up forgetting about it. But as it looked like I'd have a few hours to spare with just one arm, it seemed like now would be the time. I didn't need as long to play the game as I'd expected, but more of that later...

Alter Ego is actually a work of genius. It doesn't really look or feel like a game, and I suppose in many ways it isn't. It pulls from a pool of scenarios from the tapestry of life, and gives you choices as to how to deal with each scenario. How you cope determines how well-rounded a person you are. So if you're nice to everyone in your real life, this game gives you the chance to be a proper arsehole. And if you go around annoying everyone, you could possibly play this and see how it feels to be nice and have everyone love you. Awwwww. 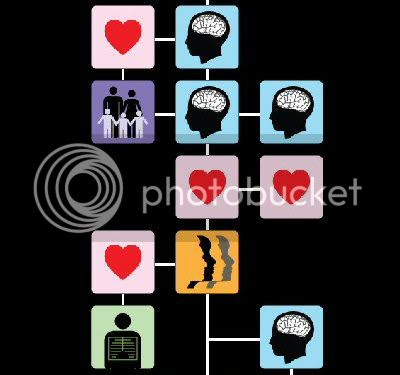 This screen is where you choose a scenario. Each icon represents a different kind of situation.

The game, or simulation as it tends to be called, was written by a psychologist, who drew from interviews he had conducted for scenarios. This lends a genuine feel of authenticity to everthing, but this could be dull if it wasn't for the fact he has a genuinely amusing sense of humour. This means that even the dullest-sounding scenario is, at the very least, interesting.

It definitely connects on an intellectual level, too. With just a couple of sentences, the author can make you feel guilty and have you wishing you'd made another choice, or feeling good about yourself, knowing that you've made a good life decision. It's very clever writing.

Interestingly, you can choose to be male or female, and if you go against your natural grain, so to speak, it will throw up a lot of situations that you could never hope to encountger yourself. And of course, it prolongs the lifespan of the game itself.

How did I get on, then? Well, I was a very well-behaved and healthy little boy to start with. I made friends easily, had an adventurous streak and liked to try new things and was generally lovely. And then, at the age of eight, I was abducted by a man in a car, tortured and killed. Very harsh, I felt, but such is life...

Play Alter Ego here.
Posted by PaulEMoz at 11:43 No comments:

Look at that title again. I don't know who the hell thought that was any kind of marriage for a fighting game. Obviously someone a bit mad. I reckon that was a tough sell to the DC Comics guys... "yeah, so Scorpion throws his harpoon into Superman's chest and reels him in like a fish, then uppercuts him twenty feet in the air before setting him on fire". They must have figured the kids would love it, because they went for it.

I'm one of "the kids", although I've waited until it was dirt cheap before I bought it (surprise!). The thing is, Mortal Kombat has always been a bit of a guilty pleasure for me, right from the first game when I used to go to the Laser Quest underneath my workplace on a lunch break and play against my mate Neil Jackson. I never manage to figure out the majority of the moves or the fatalities, but the ones I do get are usually daft enough to put a big smile on my face. 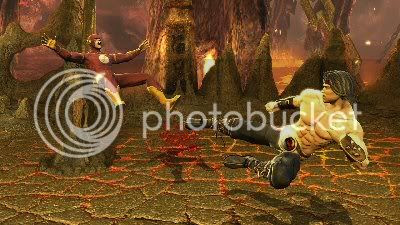 Liu Kang puts The Flash into the middle of next week.

So what is it like, then, putting a harpoon into Superman's chest? Well, it's enjoyable, of course. It's actually good fun playing on either side, even if it is pretty simplistic as fighting games go. That works for me... I can never get my head around the complexities of Street Fighter or Virtua Fighter. Mortal Kombat gives me some entertaining button-mashing beat 'em up action that does the job just nicely at the right given time.

I can't say I like the graphical style as much as the original, but everything looks fine. The fighting itself has some real weight to it, with these titans battering each other in very satisfying fashion. Slamming through walls or into the ground from a great height feels just as you'd expect it to, and when you're playing as Superman it's vaguely reminiscent of the classic fighting scene in the Superman II movie. Which is great, obviously. 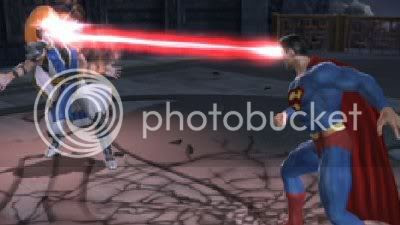 Supes shoots Raiden. THROUGH THE FACE!

It's nowhere near as good as Street Fighter IV as a game, and yet after owning it for just three days I've already played it more. That's just me and my preferences... I'm obviously a dumb, fun kind of guy. It's pretty bare bones as games go too... as far as I can tell, there are twenty fighters to begin with and no more to unlock, although there's a choice of arcade and story modes. I certainly wouldn't recommend this if you're the type of person that buys top of the range Hori fighting sticks for serious fighting, but if you just fancy some stupid comic book fighting, Mortal Kombat vs DC Universe will fit the bill quite nicely.
Posted by PaulEMoz at 19:12 No comments: