Bit quiet here at the moment, but plans are afoot...

Christmas is coming, and last year I did a Game A Day Advent Calendar. It was actually rock hard to do, and there's no chance of me doing it again this year. But what can I do instead? Well, I've decided to do The Twelve Games Of Christmas. And no, I'm not finding games that have partridges or lords a-leaping... I'll be giving away a game every day for twelve days in the run-up to Christmas!

I'm too good to you lot. Now, most of these games will be PC games, via Steam. Sorry if that rules you out, but there might be the occasional game (or maybe gaming-related item) that's on another format... Haven't decided how the giveaway will work yet, but it'll be based around getting more readers here and followers on Twitter, no doubt.

I've got more, too. Remember the Braybrook series? There's going to be something more based on that. I can't say what yet, and it's not all my own work, but I'm quite excited by it...

And then I'll be thinking about more things to do in the New Year. I'm thinking of doing something around boxing videogames, which could be interesting. There will be more videos, although don't expect commentary just yet... I tried it and it was very uncomfortable! What do you think? Is there anything you want to see me have a go at? All comments and suggestions are welcome...
Posted by PaulEMoz at 15:40 4 comments:

Rising Star Games are sticking their necks out for us European gamers, and are publishing some very niche titles from the country that specialises in niche titles - Japan. Last year, they published My number two game of 2010, Deadly Premonition. At the beginning of this year, they published a game I enjoyed very much, Deathsmiles. And now they've mined that very same vein, and published another Cave shooter... DoDonPachi Resurrection. 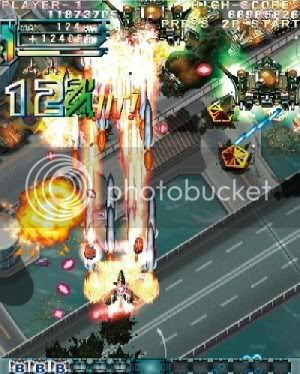 I'll be honest... I was never a great fan of the DoDonPachi series of arcade games. I'm a simple man at heart, and I enjoy just flying up the screen, blasting whatever is in my way. DoDonPachi relies on chaining for the best scores, and I could never get the hang of it. It's not just that series, though... I'm rubbish at chaining on anything. That doesn't mean I didn't have at least a reasonable time... the sheer blasting potential means there's always some fun to be had in any game of this type.

It's not a genre that's heavily catered for these days, so even though I knew it would kick my arse to Kingdom Come, I was determined to support Rising Star and buy DoDonPachi Resurrection as soon as it was released. As is their wont, Rising Star have managed to put together a Deluxe Edition. It's not as impressive as the Deathsmiles Deluxe Edition, but you do get a soundtrack CD in with the game. It's slightly disappointing that the Black Label and V1.51 editions are paid DLC, rather than being included on the disc, but they're only 800 and 80 points respectively, so you might as well fork out the extra (I did). 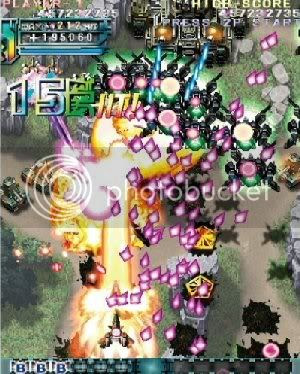 So what of the game? Well, it's a batshit-crazy vertically-scrolling arcade shoot 'em up. The fifth in a legendary series, the storyline sees you transported back in time to 2008, to where (when?) some unknown entity is sending vast quantities of material and data through portals which are spreading like a virus and threatening our very existence!

Or something like that. It really doesn't matter that much what the story is, it's just a thinly veiled excuse to put you in a spaceship and give you the opportunity to destroy many, many alien enemies. And this, you will do. You're given a choice of three ships, each equipped with massive firepower. You have a standard, wide-ranging shot, and a more focused, concentrated laser. These can be switched between at will... simply holding down the fire button activates the laser. You also have a supply of bombs, which you can deploy yourself or which can be triggered by an enemy bullet as a last-ditch defence mechanism. 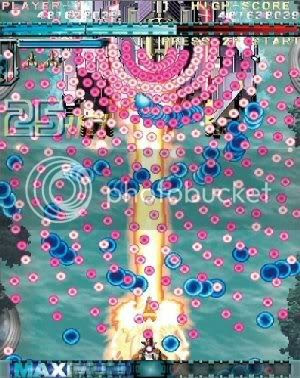 Looks like someone's chucked a bag of liquorice allsorts at me.

And then there's the Hyper. This is a special, massively powered-up version of your standard shot or laser, but you can only use it once it's been fully charged. It's worth the wait, though... not only is it more damaging, it also cancels enemy bullets and counts as hits to your hit counter, meaning you can quickly rack up a large chain, boosting your score tremendously.

It's very rewarding to see your counter rocketing upwards. It's also pretty difficult to keep it that way... at first, DoDonPachi Resurrection is a bit like a standard shmup, but then the madness kicks in and the screen starts to fill with bullets and projectiles. I'm not kidding... weaving in and out of the mass of blue and pink takes a steady hand, a sharp eye and not a small amount of luck, if you're anything like me! 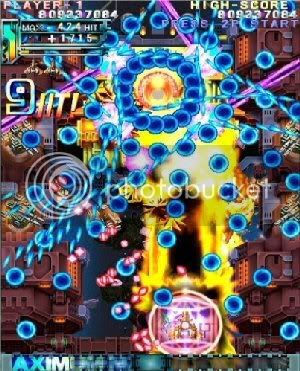 I won't lie... I'm not great at these games. But the masochist in me still enjoys playing them. I've been playing this sort of game since the days of 1942, and because I'm quite good at the old-school games, I feel as though I shouldn't let the new breed beat me. It's a faint hope, but I do enjoy trying. Sadly, after a week or so, I was ranked at number 81 in the World on the Normal version of the game. That means that hardly anybody has bought it so far, which is terribly disappointing, if that's correct. Rising Star Games need our support, so that they'll keep bringing these games over here. Nobody else will do it, and they deserve our attention. They're not for everyone, but they're for more than have (apparently) bought it so far. If you fancy a real challenge, and something a bit different from Generic FPS #337, and you've got some money burning a hole in your pocket, be a devil... buy DoDonPachi Resurrection. I love it.

Images courtesy of the Rising Star Games website.
Posted by PaulEMoz at 19:34 4 comments:

I've just been having a look at some of the templates available on Blogger, and I'm considering a bit of a redesign. One of the main benefits of this will be that I'll be able to use bigger screenshots, which can only be good, surely? Although, I'm wary of that, because some emulators will be restricted in the size of the images I can take, and I want uniformity or the blog will look messy.

I'm also wary of overdoing it, as it's easy to go from clean and simple to cluttered and messy. A change might be nice, but not just for change's sake.

So, what do you think? Good idea, or not? I might be doing a bit of experimenting over the coming week or so, so if you see something you don't like, don't be afraid of shouting up in the comments. If you've got any suggestions, let me know, too. For instance, thoughts on a good width would be handy. Is 1024px wide the accepted standard these days, for instance?

Other than that, we're coming up to Christmas. I won't be doing an Advent Calendar this year... it was hard enough getting games for each date last year! I will be doing a top ten in the New Year though... and much sooner than last year's! I've also got a couple of other features lined up. I'll try and do more videos, and I'm going to look into ways to make them better too.

So, I might be quiet... working seven days a week at the moment hasn't helped on that front. But I'm still here, and I'm going to keep this going, so let's see how it goes!
Posted by PaulEMoz at 15:45 6 comments: