Out of all the games on the list, Split/Second is perhaps the one that surprised me the most. I mean, I do love a good racing game, but this one was up against the heavily-hyped Blur as direct competition, and although developer Black Rock had a racing pedigree, Blur came from Bizarre Creations, who apart from the Geometry Wars games were known for a little series called Project Gotham Racing... 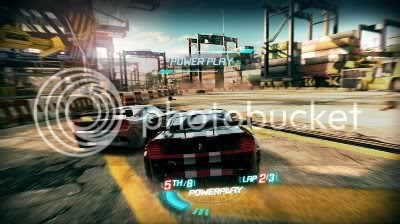 OK, so we can only have two fielders outside the circle here... what?

Split/Second comes at the racing game from a different angle, pitting you as a contestant in a dangerous high-speed TV show. To bolster that impression, the whole front end is served up TV-style, with an announcer, erm, announcing where each episode will take place and what will be involved. When playing through a Season, you get to choose the running order. That's crazy, what would the TV executives say?

As far as gameplay goes, I reckon that Split/Second comes off as kind of a cross between Burnout, The Running Man and ITV's Run The Gauntlet (who remembers that little gem?). The racing is fast and furious, some of the events are a lot more interesting than you'd expect to find in a racing game (you don't normally expect to find heavily-armed helicopters or trucks spewing explosive barrels in your way), and the stunts are spectacular... 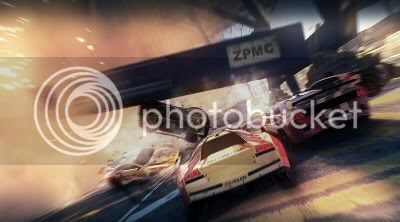 It's all going wrong here...

Let's talk a bit more about those stunts. As the game is rigged to be like a TV show, there are explosives and set-pieces all over the place. Of course, they're no fun if they just sit there, so by racing in a dangerous or daring fashion, you're able to build up a powerplay meter. This has a number of levels... at its most basic, you can trigger it and take out a number of opponents if you time it right.

At its most powerful, though, you can unleash a course-changing catastrophe, some of which include bringing down a building, crashing a plane onto a runway or blowing away sections of a dam. These events are truly spectacular, and the first time you set them off it's a real jaw-dropping moment, and if you come through the other side unscathed you come away with a real adrenaline rush and a huge grin on your face. 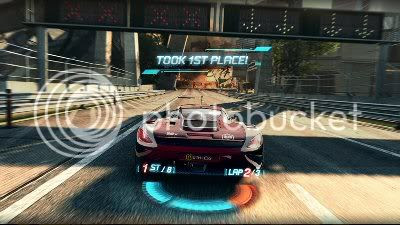 There are a couple of slightly weak points... the racing, thrilling though it is, has a tendency to have some harsh rubber-band AI. I don't particularly mind that, but I know that some people do, so it's worth bearing in mind. Also, considering the fact that the game is set up as a TV show, not enough is made of that through the actual racing. It would be nice to have the point reinforced now and then (not incessantly) with a little commentary on key events. Another thing... if you wreck a racer I reckon they should be out of the race and replaced by another competitor, although that might make it tricky when it came to you being wrecked... 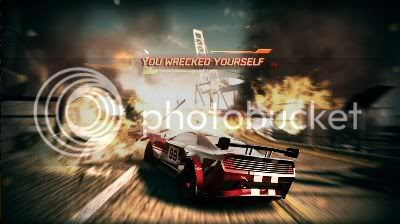 Yeah, well, it's not like it hasn't happened before...

Those are minor quibbles, though, and don't serve to spoil what is an extraordinary video game racer. I don't usually sell or trade in that many games (although I might be having an eBay blowout in my week off!), but sometimes needs must, and after I'd seen the end credits on Split/Second I flogged it off and put the money towards something else. I kind of regret that, and in fact I'm going to re-buy it, such was my enjoyment of the game. If you haven't played Split/Second yet, I'd highly recommend you hunt it down yourself.
Posted by PaulEMoz at 16:48